THIS IS THE DEAL OF THE CENTURY!
For the next six weeks you can buy ANY TWO of the following Gonads albums for just £10 plus p&p. This amazing offer covers: Greater Hits Volume 3: The Complete Cobblers, All The Loonstompers, Glorious Bastards, Old Boots No Panties and London Bawling.

***After you've placed your CD order, you need to send an email to shop@the-gonads.co.uk to let our highly-trained team of geriatrics know WHICH TWO ALBUMS you want.

PLUS for the same period we are reducing the price of our lyric book, I Lost My Love To A UK Sub & Other Punk Rock Sob Stories to just £2.99 plus p&p.

THE GONADS - ALL THE LOON STOMPERS

Signed photo of Gal Gonad himself, giving it large.

With Halloween fast approaching, we have the perfect antidote to all those knasty knockers!

Keep pesky Trick-Or-Treaters away from your house by pinning a signed photo of Gal on your front door. We don't like it any more than you do, but it's more effective than garlic and it's cheaper than hiring an exorcist.

Devilishly devious...  and deviously devilish!  Sick sick sick's the number of this beast!

The signed photo itself is free - all you pay for is the postage.

The Gonads By The Thames – Live DVD

Director Ken Webster says: "Gal and the band redefine how a punk band should play. This basement club rang with noise as they ripped up all the rule books. Great fun, fantastic lyrics, brilliant night out, all captured on this live DVD. They must be South East London's finest band."

The turd in the thrillogy, oops, we mean the third in the trilogy.

A brand new streetpunk album compiled by Street Sounds in partnership with the Oi! The Boat records.

Side A 'Rude Boy's On The Rise' by The SkaNads,
Side AA 'Too Late' by Girls Next Door (featuring Sam Bailey)

All prices include postage.

THE GONADS/UCHITEL TRUDA split EP - OI! WE WILL NEVER BE DIVIDED : VOL. 1

All prices include postage.

7" single features 'Skinhead Girl' and 'The Joys Of Oi!'

STREET SOUNDS is a magazine from the arse-end of Britain that celebrates street culture the world over. We’re about punk and Ska, football terraces and film sets, Mod, rock, Britpop, books, poetry, comedy, Scooter runs – you name it, if it’s got spirit, guts and attitude we’re into it.

Street Sounds, in our small way, sets out to be the antidote to the X Factor, and the narrow, suffocating world of Simon Cowell-approved pop-pap. Our attitude has its roots in irreverent rock weeklies like Sounds and long extinct street mags such as Pulped, The End and Sniffin’ Glue. We live and breathe for raw, exciting rock, earthy Ska, D-I-Y self-starters, fresh views and challenging opinions. Copies available from HERE.

This limited edition beauty comes with a whopping EIGHTEEN tracks and a brand new Franken-Skin themed cover design by Sucker. Produced by the visionary Joe Pogo Records in the USA, this vinyl delight includes 'Franken-Skin' and the demo version of 'Charlton Tel's Stag Weekend'.


4-track 12" limited edition vinyl version of the Ska For Heroes EP
The title track is a medley of songs from The Somme picked and performed by Buster Bloodvessel. The EP also includes 'Cheeky Chappy' by The Gonads Vs The Coverup featuring Liberty Hayes,
'Long Ska Summer' ftg Jennie Matthias (Bellestars, 1-Stop Experience) and P45's Jack Kendall and Resistance 77's 'Far Away' ftg Liberty Hayes. All profits from the sales will be split between charities working for former British servicemen - the Chelsea Pensioners, the Erksine Hospital and Help For Heroes. £14.99 including p&p in the UK.
Please note: this special collectors' edition record will be shipped from Northern Ireland.

Features the Doctor Who Theme 50th anniversary remix by DMG
and 'No Sleep Till Skaro' by Maninblack.

This 13-band, 13-song 12" vinyl compilation from Pirates Press highlights the best in current Oi!/street punk from around the world.

As with the previous editions, all tracks are either un-released or virtually brand new. You'll undoubtedly buy this for a particular band and discover new bands that you will love as a result! With these bands, and these tracks, it's a sure bet that you'll get turned on to someone new to listen to!

The CD is how it comes, in a humble plastic wallet; nothing fancy.

Available now! (Very) limited numbers of '30 Years Of Oi... Never Surrender': an amazing double CD in a deluxe DigiPak with a booklet covering all 42 featured bands.

Three decades after those milestones of working class punk , Oi! Never Surrender updates the story. And the godfather of Oi! has done it again! Gal Gonad, in cooperation with Contra Records and Longshot Music, proudly mixes old favourites with up-and-coming bands – the new breed meets the old bastards! And Oi! is not just a British phenomenon anymore, it's a worldwide movement! This is what this incredible compilation represents: bands from all over the world – from the backstreets of Berlin, to the rehearsal rooms of Boston, to the beaches of Australia and the pubs of London town – Oi! Ain't Dead!

Price: £15 plus postage and packing

CHARLTON BOYS by The Gonads

Available again: the first three Oi compilation CDs: 'Oi The Album', 'Strength Thru Oi' and 'Carry On Oi!!' All conceived and compiled by Gal. Historic note: 'Oi The Album' originally came out on EMI in 1980. 'Strength Thru Oi' (which was on Decca) and 'Carry On Oi!' (Secret), pictured on the left and featuring the original version of
'Tucker's Ruckers', were released in 1981.

The albums have been re-issued on CD by Captain Oi.


Each CD costs £9 + P&P... or take advantage of our SPECIAL OI!FFER - PACKET OF THREE
Get all three compilation albums together for the reduced price of £25 + P&P

The vinyl LP comes with a 3-track EP
British Steel : I Lost My Love To A UK Sub : Big Balls

Oi! Back And Barking t-shirt

Available in S, M and L

This is a music biography like no other you will ever read. It reveals the truth about one of the rowdiest, virile and dangerous bands ever to grace the UK charts. As lead singer of the Cockney Rejects, Jeff Turner was responsible for some of the most explosive gigs in musical history. Adopted by West Ham hooligan mob the ICF as their band of choice, Jeff and his band frequently had to deal with the kind of violence the ICF usually reserved for the terraces.

The book has been co-written by Garry Bushell, former Sounds writer, and inventor of British Oi! Music. "War on the terraces was nothing compared to life on the road with the Rejects", says W.H.U.F.C. top hooligan Cass Pennant about the book. This is the GERMAN EDITION - published by Iron Pages. 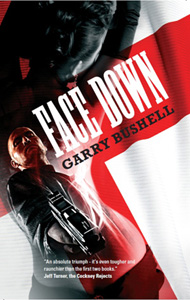 Garry Bushell's third Harry Tyler novel, Face Down, is out now. Face Down is hard-hitting, sexy pulp fiction that rattles along like a Japanese bullet train. When a vigilante starts assassinating criminals he believes have been treated too leniently by the courts, Kent police are stumped - until they spot a possible link to the shootings and an outspoken rightwing newspaper columnist.

Jailed South London crime lord Johnny Baker, known as Johnny Too, agrees to be the bait to lure the killer into the open. There's just one problem – he wants retired undercover detective Harry Tyler, the man who put him away, to be part of the plot. And Harry's supposed to be dead...

Face Down is the third part of Garry's controversial Harry Tyler trilogy following the successful debut novel, The Face and it sequel, Two Faced, but can be read as a stand-alone novel.

Praise for Face Down: 'Mickey Spillane with a pinch of Micky Flannagan' – South County magazine. 'An absolute triumph, even tougher and raunchier than the first two books' – Jeff Turner, Cockney Rejects.

THE WORLD ACCORDING TO GARRY BUSHELL

Sometimes outrageous, always courageous, The World According to Garry Bushell is a broadside aimed squarely at Britain's self-serving elites. Garry writes with feeling and humour about the causes closest to his heart.

He is for England, for the working class, and for democracy. He's against the EU - 'the greatest stitch-up since the Bayeux Tapestry' - unfettered immigration and the nanny state with its smoking bans and booze lectures. Garry challenges every aspect of the modern world from throw-away 'celebrity' culture to the self-loathing Guardian mentality.

From Live Earth to wind turbines, from pop politicians to the PC police, all manner of fashionable nonsense is judged and found wanting as Garry declares war on New Labour and the Cameron Tories.Wearing middle class disdain as a badge of honour, Garry stands up for Joe Public as he demands more freedom and less bureaucracy, and champions the everyday people who make Britain great.

And all with the same blend of killer one-liners and politically incorrect wit that makes his TV column such an essential read. Garry's comments will surprise and amuse, but above all provoke. You have been warned!

BUSHELL ON THE RAMPAGE - THE AUTOBIOGRAPHY OF GARRY BUSHELL

As well as singing with the world's greatest (and only) Oi-Tone band, Garry Bushell has carved out a 35 year career as a rock writer, columnist, author and TV personality. This funny, moving book gives you the low-down on his colourful life and times. The 'Godfather of Oi' has been befriended by Benny Hill, fed heroin by Hanoi Rocks and propositioned by... Frankie Howerd!

He has appeared on more than 2,000 TV shows, fought Lloyd Honeyghan, been investigated by MI5, and has upset everyone from the Guardian to psychopathic neo-Nazis.

His autobiography follows his extraordinary journey from the backstreets of South London via punk, 2-Tone, Mod, rock and Oi to the superficial world of full-on celebrity, with a cast of thousands including Barbara Windsor, Freddie Starr, Ozzy Osbourne, Page 3 girls, groupies, stalkers, villains, revolutionaries, Dale Winton, Iron Maiden and of course the Cockney Rejects.

SORRY, THIS BOOK IS CURRENTLY SOLD OUT