Please note the items you are about to read consist largely of scurrilous gossip, vicious back-stabbing and idle speculation. As Jon Stewart might say, its stories are not fact checked. Its informants are not journalists. And its opinions are not fully thought through. 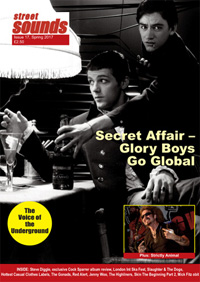 April 28. The latest issue of Street Sounds is out, packed with quality meanderings about the likes of Secret Affair, the Anti-Nowhere League, Steve Diggle, Cock Sparrer's new album and... US! Yes, the secrets behind the Gonads' legendary 1998 US tour are spilt in hilarious detail! The mag also covers hot Casual clothes labels, Red Alert, Jenny Woo, the London International Ska Fest and much more. It's a veritable bargain bucket of boot boy and rude girl delights. And all for £2.50, which is less than Lee Wilson spends on beer in a calendar year. You can order it from here.

Also out now: the new album from the Warriors, called Lucky Seven, on Step 1 Records... Lion's Law's From The Storm album on vinyl and picture disc (Pirates Press)... and also from Skippy & Co at Pirates Press, the new Cock Sparrer single 'Every Step Of The Way' b/w 'We're The Good Guys' on coloured vinyl. The album Forever is due out any day now on vinyl and CD, the CD comes with four extra tracks.

April 26. Last night's Punk Rock Curry Club didn't get off to a flying start. Paul 'Stalin' Hallam had recommended the Silka Indian restaurant just down from London Bridge but the international Mod of mystery disappeared into the night sporting a bizarre hat, leaving Gal to get hungry club members from the Old Kings Head to the curryhouse. This resulted in a lengthy detour through and around Borough Market, which invited less than respectful comments on Facebook from the bemused party. Steve Whale wrote: 'Just in case anyone is interested Garry Bushell is now doing guided walking tours of Borough Market, at London Bridge. A few "committee members" took part in this intriguing adventure last night and I have to say its highly recommended. I personally gave it a five star rating on Google!!! Just saying!' Shona Wattsie Watts added: ' Just don't wear any heels higher than an inch and bring a packed lunch as you could be hours, it's more of a mystery tour that Garry gives." The loyal Terence Hayes, PM, weighed in: 'It was so interesting, I really look forward to doing it again. What was excellent was when teenagers asked if we were hunting Pokémons as everyone was walking along following directions on their hand-held devices.' Whether or not Lee Wilson was the only one wearing heels, as Whaley claimed, is a secret we don't care to divulge. But we can reveal that Lee did actually buy a round of beer... for two people. In attendance, as well as the above, were Mark Wyeth from the Moonstompers, Geno Blue from Club Ska, Mat Sargeant from Chelsea, Robin Guy from Sham 69 and Max Spartan or Popadom Max as he is now forever known. When we finally reached the Silka restaurant, just forty yards from the boozer, Max immediately ordered 20 popadoms. When they went he ordered another 20. And when they went, and the main courses arrived, he ordered another ten... single-handedly adding £75 to the bill. Max, it's fair to say, likes popadoms more than most. In fact next time you see him on the door you know how to distract him kids – drop off 90 popadoms plus onions and dips and the Mujahedeen could walk in without Max noticing... Apologies for absence were received from Stinky Turner (on tour in South America), John King (listening to the Wurzels on a West Country beach), the Anti-Nowhere League (in meetings about the film of Nick's book), Barnet Mark (at Chelsea), Chelsea Dom (IBS) and Garry Johnson (doing press for his Serial Killer novel).

PS. If you thought Gal's guided tour of SE1 was challenging, you should probably steer clear of his ever more fearsome walking tour of Soho. Northern Pranksters Nick and Mike claim that they were left "drained, excited and occasionally terrified" by the experience... and normally you'd pay extra for that.

The League of Labour Skins took the unprecedented step of DISOWNING Jeremy Corbyn's Labour Party yesterday. A grim-faced insider tells us: "For the first time ever the LOLS are recommending to our members that they don't vote Labour. We cannot endorse the party's insane lurch to the far Left. The lower the Labour vote, the higher the chance of us getting shot of Corbyn and returning to a true working class Labour Party." LOLS further shocked seasoned political commentators by CONDEMNING the author John King for his failure to launch the People's Party of Great Britain in time for June's general election. Both the PPGB and ELF (the English Liberation Front) were chastised for "talking and not doing". (A bit rich when you recall how inactive LOLS have always been, but there you go.)

April 25. Not much can be revealed about the Jolly Pranksters St George's Day weekender by order of the brethren. But we can report that it was the most prestigious gathering ever seen at that Kent place with record numbers of herberts, scooterists, suedeheads, rude boys, ruder girls, skinheads, Mods, rockabillies and Casuals in attendance. They were joined by Pearly Kings and Queens, Cass Pennant, Del The Butcher, tattooists, barmaids, comedians, pie tasters, punk golfers, four white witches, three droogs, two Church of Oi vicars (actually one but he is severely schizophrenic), one Donald Trump (Old Barry fell for the "it's fancy dress, Baz" wind-up yet again), one member of a house-hold name rock super-group and various visiting brethren from France, Canada, Australia, the USA, Corfu, Germany and Spain. In one lone moment of seriousness, Perfect Master Terence Hayes PM rose to his feet to announce that Pranksters elders had rejected "without reservation" an attempt by Sky Television to make a series called Inside The Pranksters. "This will not happen, not now and not ever" said the PM to thunderous applause. "The secrets of our fraternity must remain between us always!" (Sobs were heard, plus general abuse and cries of "Hang the bastards!") El Tel went on: "Besides intimate footage of our over-80s nude hang-gliding lodge in action might put viewers off their tea." As is traditional Terence was then lifted shoulder high and paraded around the camp site by the cheering throng. Events and entertainment included stand-up comedy, the traditional tug o' war, a darts tournament, three Ska DJs, two bands (including Donkey Dom), toasters (disappointingly just two blokes making toast), the first ever Crown Bowls challenge (thanks to Blades Lodge), walking football, and a splendid scooter run. Leaving aside Fat Col's latest stab at stand-up comedy, it was all a magnificent success. The weekend ended with the traditional burning of the EU traitors' flag and the ceremonial raising of the colours of St George and St Edmund the martyr. To order brethren! For Albion! In us and through us, England lives!

April 10. Goddamnit! We're trying to stay off-line and Cock Sparrer go and release their first new song for donkey's years! 'One By One' is up on YouTube now as a taster for Sparrer's new album Forever which is available for pre-order now and should be shipped in any format by 25th April. They're also slotting in a mini-tour of the British Isles in late September, early October.

While we're here... we hear disturbing news of the Angelic Upstarts' gig at London's Underworld last Friday. Firstly our spy Slippery Ted says "there were more people watching the Nightly Show than there were in the audience". And secondly he reckons that at one stage a knackered Mensi had to sit down on stage. Wattsie Watts has flown to his defence claiming this only happened when there were problems with the guitar amp. But Ted insists Tom was "looking proper cream-crackered and out of condition".

Regrettably Fat Col has used this info as a reason to include the elderly South Shields campaigner in his despicable and uncaring Dead By Christmas betting odds. Mensi is now second favourite behind Wattie and just ahead of dear old Max Splodge and Buster Bloodvessel. Charlie Harper and Garry Johnson are NOT contenders of course as they have both been officially declared immortal. We find the whole enterprise distasteful, but that said, Col any chance of a tenner on Gal conking out first? At 20-1 he's at better odds than One For Arthur and only slightly behind Des O'Connor. Okay, that's us done for a fortnight. See you after St George's Day, fate permitting.

April 3. Hey hey we're the Gonads, the nuttiest boys in town... with all the beer-swiggin', skirt-chasin' and hard-rockin' that entails. But even we need a holiday from ourselves sometimes. So this blog will now be shut for a couple of weeks for a full service, while we repair to Kunlun to work out with Lei Kung (the Thunderer). It's possible that if we focus our chi correctly we will finally manage to channel the Iron Fist and come back ready to strike down our mortal enemies (round-dodgers, Remoaners, Roland Duchatelet etc). If not we'll be back in a couple of weeks for Punk Rock Curry Club, as normal. Cheerio.

PS. Sadly our unexpected break means we are unable to announce, celebrate or review the imminent new album from one of the BIGGEST bands on the whole rootin' tootin' streetpunk scene... it's been a while since their last full-length platter but believe us you will NOT be disappointed, cock.


April 1st. The Gonads have been booked to play Punk Rock Bowling, It Ain't Dead and the Coachella Music & Arts Festival. News of these exciting developments came this morning in a round-robin email from Fat Col confirming our availability, giving us detailed set timings and requesting our rider requirements. Everyone was excited until we noticed the date...

John Lydon is in trouble with the usual suspects after a week where he defended Brexit, Nigel Farage and Donald Trump. Naturally he couldn't give a monkey's toss. John said of Trump: "The attitudes that are being pulled on him are stupid and wrong. He's got some serious money issues and business concerns that deeply fascinate all of us but to be smearing him as a racist, this isn't right, there's no evidence or proof to that and until there is, I'll stand up and say that I think that's wrong. In the past I have had that accusation thrown at me willy nilly and it's a damn hard one to have to listen to and endure – make sure it's right." He went on: "There's a terrible attitude in left-wing politics – they just feel they have the pomposity and right to just throw these accusations out without any evidence – well don't, because my world requires facts. For the next week and a half the rag-and-bone trade that we call the media is going to be calling me a racist, that's the tomfoolery of it all. That's going to be damn upsetting all over again to my grandkids, isn't it?" Earlier this week, Lydon described meeting Nigel Farage as "fantastic" and spoke positively of the Brexit vote. He told NPR: "I'm a natural-born anarchist. I've never in my life supported any government anywhere, and I never will... I really liked what Obama was promising and that's when I became an American citizen... " Of Trump, John said: "I think he's absolutely magnificent. He's a total cat amongst the pigeons. It's got everybody now involving themselves in a political way. And I've been struggling for years to get people to wake up and do that."